A DIFFERENT KIND OF TRAIL-RIDE 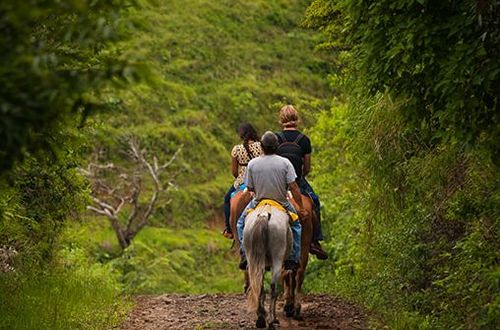 What if you can receive a totally different kind of possibility that allows you to create all kinds of magic, with a lot of ease?

The first time that I recall being on a horse was when I was very little, and I stayed on until the first time the horse decided to have a full body shake, which wasn’t very long, and I slipped straight out of the saddle and landed in the dirt. The next time I was allowed on a pony was at the school fete, where people would be led around in a small loop for a minute or two.
I’ve always liked horses, though I never had anything to do with them as an adult until I decided to do a do a Conscious Horse Conscious Rider in Victoria, Australia with Suzy Godsey in November 2014. It was a fantastic class where I learnt a lot of hands-on techniques, a lot of different methods of communicating with animals and got more comfortable being around horses.

One day in January 2015 I was sitting at home and decided that I just had to get out of town and do something or else I was going to go crazy. I started searching the internet to see if anyone was running multi-day quad bike trips (I had recently spent 12 months working in Antarctica and one of the ways we could get around outside of the station limits was using quad bikes), though I kept getting horse riding trips showing up instead! I found that there was one with a 6-day ride starting in two days’ time. I phoned them up the next morning and asked them about their trip and if they really did take people who have never ridden before on these trips? The woman gave me all the information and said I was more than welcome to come along, I just had to be at their house by 8:30 the next morning. That was good enough for me!

All the people were friendly and helpful when I arrived the next morning and made sure I had everything I’d need for the ride. When I was told which horse I would be riding, I did remind them that I had never ridden before, as I was to be on the biggest horse out of the lot. I tried to recall all the things that we talked about during the Conscious Horse, Conscious Rider class and started to put as much of it into practice as I could recall. I was shown how to brush down, put a saddle on, get on/off, what to do if the horse was to try and take off and given some pointers on how to ride and as soon as everyone in the group was ready, we headed off.

The trip was arranged such that we would meet up with the support vehicles at various times during the day for meal breaks and they would set up the campsite each night. If there were any problems with the horses or the people, help was never very far away.
There was one woman with us that had only ridden a few times before, and after she had fallen off for the second time before our first stop, I was beginning to wonder what I had gotten myself into. It was a good incentive to keep putting the tools from the class into action though! Being present with the horse and being aware of everything the horse was aware of in the surrounding area, was what it boiled down to at that moment for me.

It was a great day of riding and I was getting more comfortable the longer I rode. When we arrived at the camp that evening we unsaddled and washed down the horses and let them enjoy their well-earned rest. Most evenings I would do some hands-on work on the horse that I had been riding. At first, she didn’t quite know what to make of it, though quickly came to enjoy it and relax.
As we rode into camp at the end of the third day, a few people were saying how tired and sore they were feeling, which I was a little surprised at as I was the beginner here and was only slightly sore above the inside of my knees. I put it down to the tools and energy work I was using as I rode, and was very happy not to be sore!

All the staff members kept an eye on me, gave me tips now and then and we’re always happy to answer any questions that I had. I heard one night that a couple of the staff though I must be a ‘plant’, along to see how they ran their trips; I took that as a compliment, though I laughed and assured them that I wasn’t and that it was my first-time riding. The horse I was riding was fantastic and looked after me well everywhere we went, and we covered some steep terrain during the week.

I’ve gone out riding with the same company most times I’ve been back in Australia since and have had some amazing times. I rode one horse that I only had to think things and he would do them, which I loved. the next afternoon I was on a different horse and the ‘thinking’ wasn’t working with her, instead I had to go back to using movements to get her to respond. At first I found this frustrating, then I realised the horse was probably having the same problem, so I started asking, ‘How would I have to communicate with her in a way that she can understand?’ This proved much more effective than getting frustrated and after playing with this as we rode for the next hour or so, I could ‘think’ my requests and use much smaller physical commands to achieve the result I was after.

With each ride I have been on, I’ve learnt more and different things and not always to do with horses. During a ride, I have even used the hands-on techniques I learned in the horse class with a rider who’d managed to move her neck in some way and could hardly move her head in any direction.  After 10 minutes of working on her, she was just about back to normal again!
​
The things that I learnt with horses have been useful in other areas, with other animals and with people also. Who knows what results you can produce until to decide to find out?